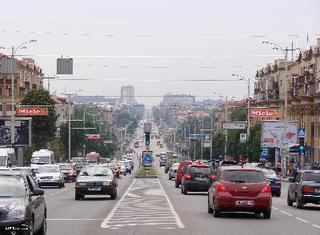 If you have never been to Zaporozhie, you are very much welcomed to this city! You can spend a great time in the company of a gorgeous local lady and enjoy sightseeing. The sooner you visit this city – the better for you! ;-) When you have chosen the lady of your heart, it is time to pack the luggage and again welcome! With the hospitality of the folk living in Zaporozhie you will hardly want to leave this place. Warmth, friendliness and hospitality are considered the main parts of human relationship.

Zaporozhie features many parks, gardens, famous towers of Leninsky Prospect, a large industrial sector and hydroelectric dam that divides the Dnieper River. You will be stroken with the natural beauty of the city as it is known world-wide as mostly industrial city. A great variety of wild life and landscapes will gladden your eyes and heart. Numerous parks, fountains, botanical gardens attract not only the residents of the city, but also foreign guests. All this, overall enriches the appearance of Zaporozhie. You have a great opportunity to see all this with your own eyes if you decide to travel to Zaporozhie!

You may wonder what “must see” places in Zaporozhie are. If you get to travel there, don’t miss a chance to visit Khortitza that is the historic home of Cossacks. Many attractions of Cossacks history are still preserved on the island. Museum and Cossack show are what is recommended to be watched. You will be impressed by the customs of Ukrainian ancestors. For almost three centuries Cossacks were struggling for national, social and religious freedom.

Zaporozhie is situated in the steppe zone where summers are hot (+25C-+35C) and the winters are mild (-10C-0C). The climate is relatively dry with moderate weather conditions.

Zaporozhie has a very developed transportation network. Highways, railways, water-ways and air-lines connect the city with many cities within the country and abroad. In the South of the city you will find a Sea of Azov and Kakhovsky Reservoir that are two famous health resorts.

Click here to search singles over 40 from ukraine in Zaporohie.

The ethnic structure of the city is presented by Ukrainians – 70, 28%, Russians – 25, 39%; other minorities residing in Zaporozhie are Byelorussians, Bulgarians, Jews, Georgians, Armenians, Tatar, Azeri, Gypsies, Poles, Germans, Moldavians, Greeks. Residents of Zaporozhie speak mostly Russian. The official state language is Ukrainian.
The prevailing religion is Russian Orthodox. Other religions on the territory of Zaporozhie are represented by: Protestantism – All-Ukrainian Union of Christians of Evangelical Faith, Seventh-day, Adventist Church, Full Gospel Church; Catholicism – Ukrainian Greek Catholic Church, The Roman Catholic Church; Orthodox Judaism – one union and 6 communities; Islam – 5 communities that are a part of Spiritual Administration of Muslims of Ukraine and also 4 independent communities; Hinduism – Vedic Academy.
Visit Zaporozhie and you will open this city for yourself with its versatile life and peculiarities!